I’ve only had one dog before Cora, but he was not a healthfood nut. Tanner loved cheese and filet mignon.

Cora loves carrots, green beans, and above all, bananas. Her new discovery, however, is lettuce. I had some leftover iceburg lettuce that I bought for burgers and don’t like for much else, so I thought I’d offer it to the chickens to pick at. They didn’t seem terribly interested in it, but Cora went crazy for it! We found this whole thing very amusing, of course, so we took a quick video. Turn up your volume and listen for the crunch!

I was feeling funny (haha, not weird, though both may apply), so I made this little video for you on Xtranormal.

The Mr. would like me to assure you that this is not exactly how the conversation went, and that’s true. He never suggested a foundry. And it took him about 24hrs to realize that I was right and he’s “playing” this like it’s FrontierVille. I have a feeling we both are, to some degree. Is that weird, or what?!

It occurs to me that some of you may not be familiar with this addictive little game (that we seem to largely be ignoring now that there are Very Real Things To Do). So here’s a screenshot. Can you see the resemblance? 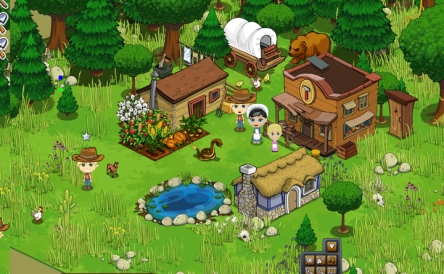 But we’re stopping with chickens and a puppy.

You know. For now.